“BOBCAT” participates in “A BLESSING OF ANIMALS” in NYC and FL

The Cathedral Church of St. John the Divine in Manhattan is the largest cathedral within the United States and is a cultural hub for the arts, hosting exhibitions, concerts and literary readings. In 2017, my over life-size “Bobcat” was included in this prestigious venue with other animal sculptures by National Sculpture Society members. 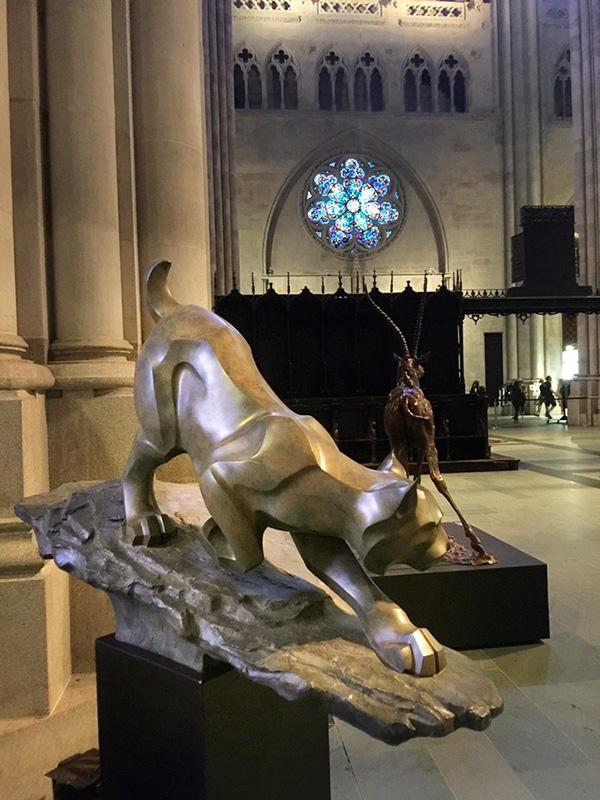 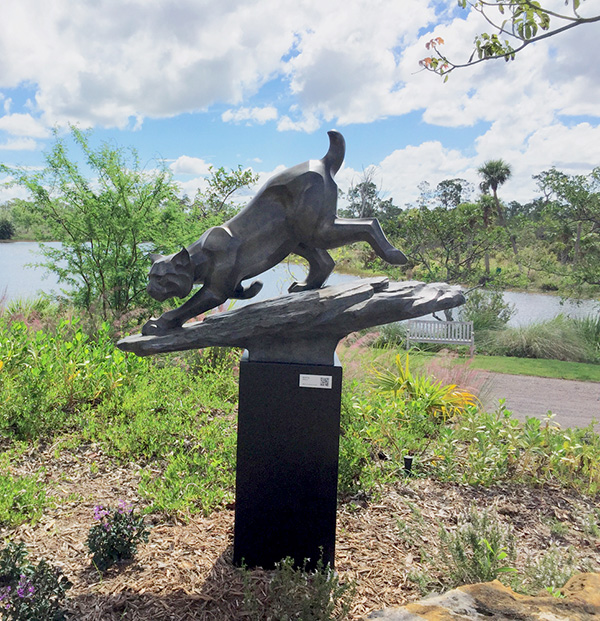 The exhibition traveled from the Cathedral to the lovely 170 acre Naples Botanical Garden in FL which has hosted frequent sculpture exhibitions throughout the grounds to complement the variety of subtropical plant life. The gardens did suffer minor damage from Hurricane Irma the week before the exhibition arrived but still provided a lovely setting for the sculptures.

I’m very excited and honored to have been featured in an exhibition at the Loveland Museum Gallery (January 30 through April 10, 2016) along with four amazing sculptors: Jane DeDecker, Glenna Goodacre, Kathleen Caricof and Kirsten Kokkin. Curator Maureen Cory describes the exhibit, “Momentum: Women Drive the Arts in Loveland” this way:

“The city of Loveland is inexorably tied to the history of art production. The cultural and economic roots of the city are invested in sculpture and bronze foundries. Both men and women artists participated in the development of the art-economy, and continue to contribute in
meaningful ways. This exhibit will describe the ways in which women were critical to the
development and define their long-lasting impact. This exhibit will display the work of 5 women who, within a challenging cultural framework, were and continue to be influential in the development of Loveland as an art center and for creating a reputation for excellence in art for which Loveland is known.”

The January 28th Museum Members’ Opening Reception was a smashing success with some patrons commenting that it was “The” place to be that evening and the “best ever” show at the Museum. The February 12th public reception with demos by Jane Dedecker, Kirsten Kokkin and myself was met with equal enthusiasm. It has been a truly exceptional exhibition and we are all grateful to the Loveland Museum for showcasing five very different bodies of work by Glenna Goodacre, Jane Dedecker, Kirsten Kokken, Kathy Caricof and myself in what has proven to be a wonderfully appealing exhibition and elegant show catalog. 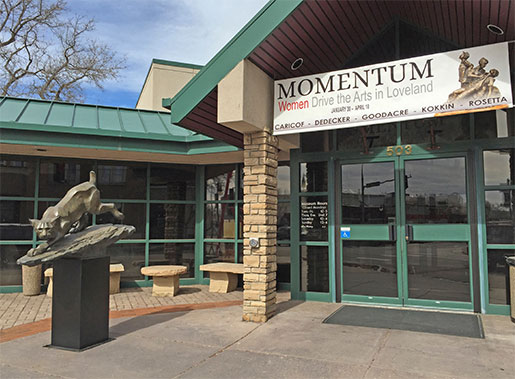 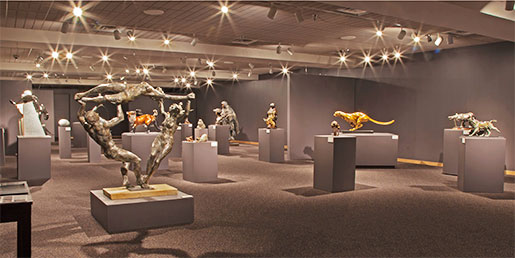 At the 2016 new venue for the Northwest Rendezvous Group’s show weekend, “The Bighorn Rendezvous” at the Brinton Museum in Big Horn, WY, I was delighted that my “Breaking Trail” received the “President’s Choice Award” for sculpture, selected by the president of the NWR and the Director/curator of the Museum. This was quite an honor considering the high quality of all of the artwork in this show. 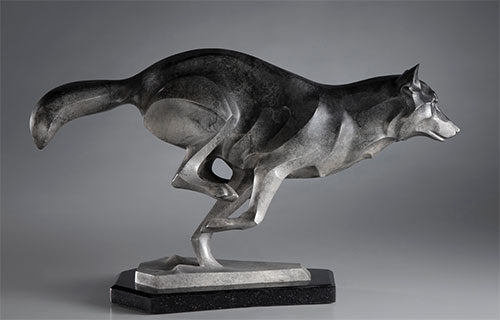 Artists for Conservation comprises a membership of 500 of the world's most gifted nature artists from 27 countries, across five continents. Of these artists, 145 were juried into the AFC’s 9th annual exhibit opening on September 29, 2016 in Vancouver, BC and online. I received the great honor of "Best in Show" for sculpture among all of these amazingly talented artists, for “Awakening Pride”, which is in the online-only exhibition due to weight restrictions for the live exhibit. 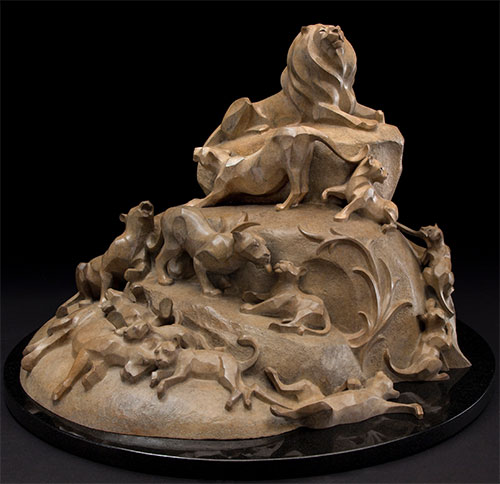 Reach for the Sky at Chapman University

A life-size "Reach For The Sky", patinaed black to match the other five Rosetta panthers on campus, was recently installed in front of the Harold Hutton Sports Center at Chapman University in Orange, CA.

The online CODAworx (Collaboration Of Art + Design) has a competition every year to select the top art/design projects in 10 categories and my entry of all of the Panther sculptures I’ve placed at Chapman University made it into the top 100, one of 15 projects selected for the Education category. 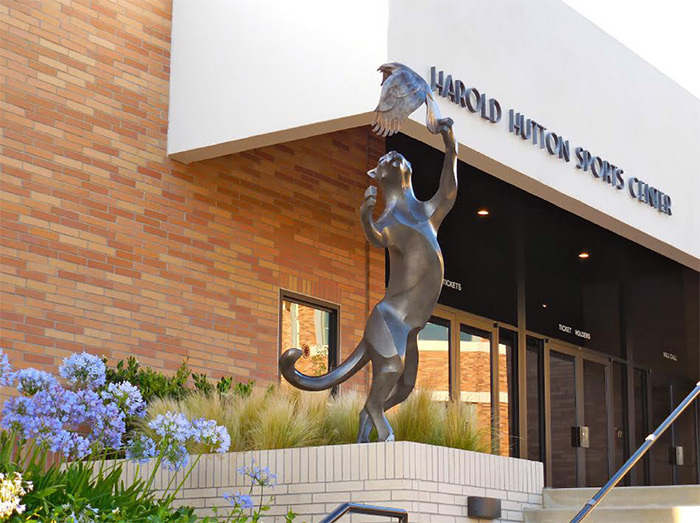 In the world of professional art consistency is highly valued. Consistency demonstrates the development of an artist's style or signature. According to Kim Barnett, owner of Oregon's Bronze Coast Gallery, this signature style is the most difficult thing for an artist to achieve. It is unique and instantly identifies a work's creator. Barnett believes sculptor Rosetta, an AWA Master Signature member, has this instantly recognizable signature style. "Her work is stylized and on this geometric plain, and still anatomically correct - very few people can create realistic sculpture that is so interpretive," Barnett says.

Rosetta's work almost entirely depicts animals, but she says that growing up in the suburbs didn't allow her much exposure to the wildlife she found so fascinating. "Much to my mother's chagrin I didn't want to play with dolls, instead I carved animals out of soap and made paper sculptures" Rosetta remembers. "It was always just there - art, sculpture, animals.

Rosetta credits her father for recognizing her artist talent early on and enrolling her in drawing and painting lessons. In college Rosetta chose to study graphic design, a field she made her living in for 21 years. Sculpture remained a personal passion and Rosetta continued to sculpt and even began casting her work in bronze, after taking a class through her local community college in Marin, California.

Rosetta calls it a natural evolution from her graphic design work to her sculpture. Type-setting, trademarks and logos previously done by hand were slowly being made obsolete by computers, but Rosetta was able to translate her aesthetic from design to sculpture. "The work I was doing required you to distill shapes down to their simple essence with as little detail as possible - so the way I stylized my sculpture came out that way as well," says Rosetta. In 1985, after she won an annual competition at the National Sculpture Society, Rosetta began to invest more of her professional time in sculpture. "That award let me know I could do sculpture that I love and people would respond to it," says Rosetta.

One of the top bronze artists of her generation...

For many gallery owners, like Barnett, Rosetta was something of a pioneer in bronze sculpture and is now considered one of the top bronze artists of her generation. "Rosetta was an anomaly - she wasn't doing realism, instead she had this stylistic approach to representative art," Barnett says. "It is much easier to follow the crowd but she really made her own way.

Rosetta believes the art world is more open to women than when she began her career almost 30 years ago, and changes to the art world will reflect the redefinition of traditional gender roles.According to Barnett, there was a time when realistic Western art seemed to be the only thing gallery owners and collectors were interested in purchasing, a genre dominated by men.

"At the time I started in Colorado, sculpture was all western wildlife and dominated by men," Rosetta recalls. "I felt shut out until I realized that my work didn't belong in those Western shows and organizations that hardly had any women artists." During those early years of her career, as she gained more recognition for her work, Rosetta was invited to exhibit alongside of the founding members of American Women Artists. "I was very new to the scene and so grateful for an opportunity to show with really good artists," Rosetta says. "I believe it helped my career get going".

Artists often create in solitude and each creation can be a very personal thing to the artist, so it can be difficult for an artist to appreciate the value and benefits of association, community and networking, according to Rosetta. "Showing with high quality artists can give newcomers legitimacy and encourages them to strive forward in their own work," Rosetta says. 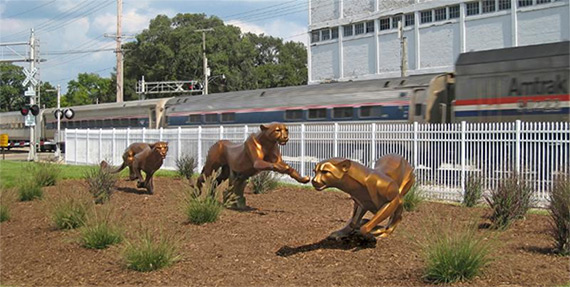 Rosetta notes: When the city of Dowagiac, MI called in 2009 (they had purchased a Lion sculpture from me years earlier) and said they wanted some running cats for a long strip next to the railroad tracks, I knew that it had to be cheetahs. Depicting three stages of the cheetah's famed running style, I'm told that the conductor on the local Amtrak run points out the racing cats to the passengers on board as they approach Dowagiac Station. 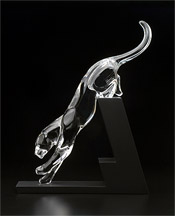 Visit Rosetta's page on the
Artists for Conservation website,
www.natureartists.com/rosetta.htm